The new model of the Primary Mental Health Team was launched in October 2016 as part of a 5-year transformational plan with Future in Mind (FiM). Service users at the time reported they really think about who to confide in when worried about their mental health, but too often are passed on to a more qualified individual. Calls into CAMHS revealed that referrers felt ill equipped to have basic conversations about mental health, and wanted to do more but were too frightened to do the wrong thing. The Wirral FiM survey (2016) undertaken with local schools told us that they wanted more contact and training with CAMHS. Referrals into the team stopped at the end of August 2016 and each school in Wirral was assigned a CAMHS worker and identified an emotional wellbeing link worker who reported the school’s needs in regards to mental health. These needs were used to shape the team’s development. We have since created a resource pack, a monthly training package, and have set up an Advice Line for parents, schools and any other organisations with concerns in regards to young people’s mental health. We work with school and the CYP workforce to empower them as the first line of support, recognising that mental health is everyone’s business.

Placing an emphasis on prevention and early intervention we now provide containment to the system around young people, to enable them to get the support they need as soon as they say they need it, from the person they chose to trust.
The new model has been well received by schools and other organisations. Feedback includes: “I find the Advice Line incredibly useful. It is reassuring to know that a CAMHS professional is available & ready to give you advice and support. The advice is always excellent. I think the CAMHS service has changed significantly over the last year & it has all been very positive. The Advice Line combined with the CAMHS training courses has meant that we can now support our students with their mental health far better than ever before” – Weatherhead High School
“A mother I spoke to reported that she was so pleased with the support she received. The resources were so helpful and she added that it was so useful having someone to talk to and appreciated being listened to” – Upton Hall High School
We have completed over 1000 initial consultations through the Advice Line, and will have offered over 1000 training places by the end of the academic year.

Training has been rated as very satisfactory/satisfactory by 97% of schools who attend, and confidence levels for understanding aspects of mental health have improved on average by 3.4 points out of 10 after school staff have attended.
Since the Primary Mental Health Team have launched, risk assessments carried out by Wirral CAMHS in the local paediatric ward following an overnight stay by a young person at risk have significantly decreased compared to this time last year. There are cases of individuals calling the Advice Line with the intention of sending a young person straight to A&E, but receiving advice, strategies and resources or urgent appointments instead.
There was also an increase in CAMHS referrals each year, prior to our launch. In a recent audit it was found that there was a change in this upward trend whereby CAMHS referrals had started to decrease. If this trend continues, this will have a positive impact on the current CAMHS waiting list. We hope that by reducing pressures on the service that we will improve the wellbeing of staff within CAMHS and reduce staff stress levels. 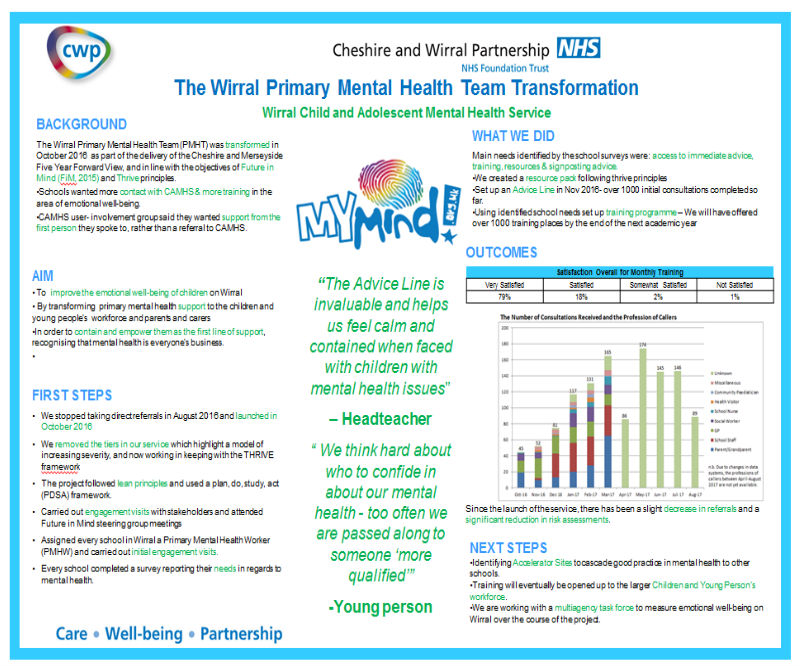 CLICK HERE
We use cookies on our website to give you the most relevant experience by remembering your preferences and repeat visits. By clicking “Accept All”, you consent to the use of ALL the cookies. However, you may visit "Cookie Settings" to provide a controlled consent.
Cookie SettingsAccept All
Manage consent