St Helens Recycling Rewards is an innovative incentive scheme run in partnership by St Helens Council and Local Green Points to encourage households to recycle more and waste less. The scheme builds community engagement by using direct communications, competitions, incentives and technology to change resident’s behaviour through a community competition model. Whilst these models are not new within local authorities, the use of incentive schemes in a waste and recycling context is innovative, with St Helens being one of the first councils to use it in this way.
Through the “community points” model, members earned points for their community’s reduction in waste and increase in recycling tonnages. Residents were also rewarded points individually for reporting what they had recycled. The team targeted areas were recycling levels were historically low, supporting the wider strategy of giving information and advice so residents are able to self serve. With prizes and an incentive scheme available, the project also supports local economic growth. The scheme launched in October 2015, with all 84,000 households in St Helens receiving a welcome pack containing information and an advice guide.

The innovative incentive scheme introduced by St Helens Council not only exceeded its objectives to increase recycling in the majority of the boroughs communities, but also dramatically reduced costs, increased recycling awareness, provided a boost to the local economy and empowered residents to support local charities and businesses. Individual prizes consisted of £50 and £25 vouchers for top performing individuals from each community and five £20 randomly selected prizes. Community prizes consisted of £10,000 worth of donations given to local charity projects every year. Top performing communities earn larger donations and vote for a local charity they want to support. Residents have positively commented on the scheme; for example resident Carol said “I was really pleased to have received a voucher as I am a keen recycler and it was nice to have my efforts recognised. I hope that other people get involved in the scheme and see how easy and rewarding recycling can be- not just for us but for our environment too!”. The scheme continues to allow residents to self serve, allows sustained community engagement and encourages communities to work together for the wider benefit of their place.

Since October 2015, over 9,500 residents have pro-actively engaged with the project and signed up to the scheme, with an average of 3,819 reporting their recycling levels each week. Email communications to residents had an average open rate of 50%, vastly exceeding the industry average of 18.5%. Use of the St Helens Council App had more than trebled, from 409 users to 1246. A tangible impact has been evidenced in increased recycling tonnages across 13 of the 16 local communities, with the majority seeing an increase of more than 7.5%. Christmas recycling tonnages increased from 685t in 14/15 to 757t in 15/16. Previously poor perfroming communities were targeted through direct email and door drops and are now some of the best performing areas. Waste being sent to landfill has dropped by 6% and residual tonnage decreases has led to a reduced levy cost of £768,000 for 16/17. The Council have continued to build on the initial stages of the scheme and engage directly via email on a weekly basis, encouraging self-reporting and offering tips and advice on recycling. Residents are also encouraged to follow social media accounts and share tips using #Recycling Rewards.

To view the video for this project CLICK HERE 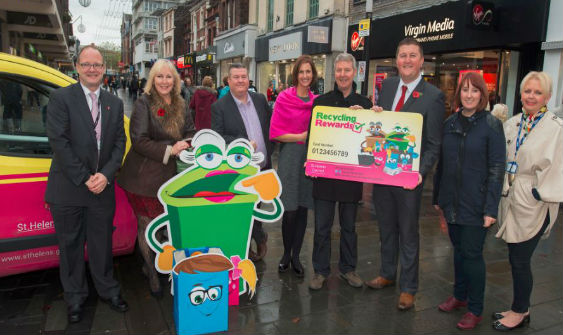